Back in the 18th century, plenty of grifters attempted to pass themselves off as royalty, but no one did it quite like Scepan Mali, aka ‘Stephen the Small,’ who somehow convinced the citizens of Montenegro to hand over their country to him
The automated account procedurally generates some incredible postmodern Pornhub comment humor
The comedian filmed a grumpy, sarcastic video while his house was going up in flames
Despite being told she had the “wrong face” by a director, Judi Dench went on to get eight Oscar nominations.
The ‘Monty Python’ member had choice words for massively exposed comics who think they’re being “silenced.”
NBC, ABC
What’s a great comedy show without a long list of great episodes? Episodes that remain in syndication for years because we just can’t get enough. We’ll latch on to a fellow comedy fan, and borderline harass them with our favorite episodes, because start to finish, they were just gold, Jerry. Gold. We’ll probably go on to regurgitate every golden line word for word, then make sure to rewatch them every so often to keep them embedded for a lifetime, ready to spew at a moment’s notice.
We all have our favorites, but what was Jerry Seinfeld’s favorite? And what was Matthew Perry’s favorite episode of Friends? There’s a couple freebies for ya. You’re welcome. We also wanted to relay a very personal (and clearly traumatic) moment from Bill Burr on F is For Family, and we got a little too excited to share which “crazy animalistic bestial love act” was Nick Offerman’s favorite on Parks and Rec. Here are these and 13 other comedians took a look back at their favorite episodes of their shows.
NBC
Outsider
NBC
Ranker
CBS
TBS
NBC
The Paley Center for Media/YouTube
CBS
Showbiz CheatSheet
NBC
Screen Rant
FX
PhillyVoice
HBO
The Rich Eisen Show/YouTube
NBC
Screen Rant
ABC
The Hollywood Reporter
Netflix, Nounpusher Photography/Shutterstock
Showbiz CheatSheet
Comedy Central
Okayplayer
Fox
Newsweek
History Channel
Outsider
NBC
Variety
The ComedyNerd newsletter is your weekly look at the world of stand up, sketch, and more. Sign up now!
Listen up, Mastodon: I will ‘choose a server’ in hell
“‘Caitlyn is starting kindergarten this year, can you believe it?’ I mean what is she about five? That sounds about right. Yeah, I can believe that.”
Wakanda Forever and Avatar 2 continue Hollywood’s love affair with barely dressed blue characters.
The comedy legend’s family posted an update on his recovery yesterday morning
Christmas + Seth Rogen = a funny movie absolutely no one talks about.
This Thanksgiving, don’t be Mr. Bean and be sure to keep your head out of the dead bird’s carcass
COPYRIGHT © 2005-2022 Cracked is published by Literally media Ltd.,

"We haven't done it in a novelty way. We've done it in a rock way."Get the latest from the Three Lions direct to your inboxWe ... Read More

Comedian Heather McDonald recently shared a warning to her TikTok followers after an unusual experience at her hotel in Texas.McDonald claimed that she was back ... Read More 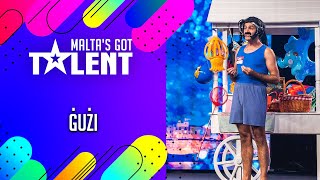 By Kira Borg MarksA stand-up comedian who identified himself as Guzi failed to amuse the Malta’s Got Talent judges with his audition last night.Guzi, showed ... Read More