Comedian Ariel Elias Reacts To Beer-Throwing Incident At Comedy Club: “I Still Haven’t Cried, And I Know I Need To” – Deadline

By Tom Tapp
Deputy Managing Editor
Ariel Elias says she still hasn’t fully processed the incident at Uncle Vinnie’s Comedy Club Saturday night in Point Pleasant Beach, NJ, a moment that’s since gone viral.
“I still haven’t cried, and I know I need to,” she said today on Gianmarco Soresi’s podcast The Downside.
“I think I’m feeling irritated at some of the attention,” continued Elias. Deadline revealed yesterday that, in addition to outlets like Rolling Stone and CNN reaching out, producers for Jimmy Kimmel Live! are looking to book the comedian.

The incident in question involved a seemingly drunk woman in the audience asking Elias who she voted for the the last election before insisting, “I can tell by your jokes that you voted for Biden.”

That led Elias to take (the verbal) gloves off.
“I can tell by the fact that you’re still talking when nobody wants you to that you voted for Trump,” the comedian replied to big cheers from the audience.
Just a few seconds later, a beer can sailed across the room and splattered against the wall behind Elias, whose jaw dropped. But without missing a beat she came up with the prefect rejoinder.
“As soon as I picked up the beer and felt liquid still in it,” Elias told Newsweek on Monday, “I knew to chug it. It felt like the only way to recover. Also suddenly I really needed a drink, so it really worked out.”
But in some ways, Elias still hasn’t recovered saying, “I haven’t slept in a few days.”
She continued, “Saturday night when I got home, I watched the video and I was like, ‘Oh…that was thrown really, really hard.’ I don’t think I had processed how hard that was thrown and what would have happened if it had hit me: It misses me, [and] it’s great for my career [and] it’s like a fun viral clip; It hit’s me, [and] it’s evidence.”
Soresi, who was the headliner that night, said the woman in question was there with about 20 friends and that they were at the club “about two hours early, drinking” and that they were “rowdy.”
After the beer was thrown and he took the stage, Soresi said he was jittery, at one point seeing a flash of light somewhere in the club — likely someone vaping — and thought it might be a gun shot.
Elias said she had similar thoughts.
“My opening joke that Saturday night was, ‘So glad to be here in South Jersey where it’s easier to get a gun than to make a left turn,” the comedian recalled, before reflecting, “It’s not out of the realm [of possibility] to think that someone had a gun there.”

pic.twitter.com/jV6tCMJoZl
Subscribe to Deadline Breaking News Alerts and keep your inbox happy.
Signup for Breaking News Alerts & Newsletters
Get our latest storiesin the feed of your favorite networks
We want to hear from you! Send us a tip using our annonymous form.
Sign up for our breaking news alerts
Deadline is a part of Penske Media Corporation. © 2022 Deadline Hollywood, LLC. All Rights Reserved. 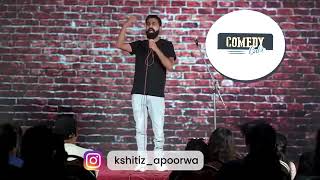 The constitution of Nepal guarantees the freedom of speech and expression as fundamental rights of citizens. But it also bars defamation based on someone’s caste, ... Read More