Comedian Darren Brand reflects on his blessings: the talent, the grind and the hustle. – WUNC

Darren Brand is a North Carolina A&T alum who has become successful through his passion for comedy. Born and raised in Southern Pines, N.C. the small town could not contain his big personality. From working with the BET network to over 80 episodes on the Nick Cannon show, Wild ‘N Out, he’s made a lane for himself as a comedian. He credits God for his natural ability to light up any room in addition to the success that has come with it. Brand sat down with Caitlin Leggett on Changing Channels for some self-reflection on how his grind paid off.
Known by his stage name “Big Baby,” the comedian has been working in the world of comedy since his emergence in 2008. He and his friends created a comedy club that would eventually catapult him to fame. Freestyle Funny included Brand himself, Chico Bean (Anthony Bean), BDaht (Brian McLaughlin), and Osama Bin Drankin (Gerard Rankin). Although they started with small performances at the Comedy Zone in Greensboro, they eventually built up their rapport and took their act on tour, selling out comedy clubs everywhere. Brand continued to achieve comedic success after being hired for college tours, and various TV network shows, and commercials.
You went to North Carolina A&T. Talk to me a little bit about that and the impact of HBCUs (Historically Black Colleges and Universities).
“Probably the best decision I’ve ever made in my life for me. Coming from a small town where, you know, you think it’s no way out. … Going to a school like A&T where when you go to orientation, you see 3,000 or 4,000 Black kids from different parts of the world, not just the US, the world, who came here to further their education. For me, that was a culture shock. I’m saying like, ‘Wow, this many black people want to go to college?’ A&T is the place that you know, molded me [and] made me proud to be Black and celebrate. It made me proud to be Black and educated.”
“My personal goal is to perform every single HBCU in some way, shape or form. And I’m probably at like 90% right now. … I’m really close to doing all, I’m only missing Hampton, Howard, Xavier, Cheney, Wilberforce, and a few more.“
Talk to me about Freestyle Funny Comedy Club.
“My support system was pretty much Freestyle Funny. At that time, you know, there was no Wild ‘N Out, none of us was on TV. … Money didn’t matter at that time, you know, saying it was really us trying to master crap and realizing we got something special. And that’s pretty much all we needed, was each other. Yeah, just our brothers, man. And, you know, that was some of [my] happiest moments in comedy was when we [were] in a van driving 17 hours to pick up a $1,000 check and split between five people. … That’s when we [were] really doing it for the love and the passion.”
“Freestyle Funny used to do a show once a month in Greensboro at the Comedy Zone. So for three years straight, we had to come up with a new 10-minute set every month. I don’t think people understand how hard that is. Then like the first year, you know, nobody would come to our shows, not even our friends. And it took years for us to build that up. And now, I can honestly say each one of us has sold out in the Comedy Zone in some way, shape, or form individually.”
What are your thoughts on the Instagram or Tiktok comedians?
“Aye man, get your bag! I have no problem with doing that. But if you are gonna step into the stand-up world, all I ask is don’t disrespect the stage or the mic. That’s it. You know, I’m saying if you’re gonna call yourself a comedian, there’s nothing wrong with being a content creator doing whatever. But if you want to call yourself a comedian, just make sure you can do it in a physical form as well.”
In any industry there are people that are considered GOATs, so who are some go-to people that you might look up to?
“Dave Chappelle. He lives a fearless life on stage, which is very, which is very rare in today’s comedy. He’s fearless. Don’t care, he’s gonna say it. And there’s other ones like my personal favorite, Jamie Fox. If you ever see me do a show, you can see a little bit of them in me.”
What’s coming up for you?
“It’s homecoming season so I’ll be booked all season. Charlotte, I need y’all to buy y’all tickets to the “Real Talk Comedy Tour.” We will be at the Bojangles Coliseum, [on] October 30th. I need y’all to pull up for me, DeRay Davis, Rickey Smiley, B.Simone, Jess Hilarious, Money Bag Mafia. Charlotte, I live here so don’t let me down!”
Although Brand listed this show for what’s coming up next, he admits he’s not necessarily looking too far ahead. Instead, he is thankful for everything he has accomplished this far.
“…everything I’ve ever dreamed of, for the most part, has happened in some way, shape, or form… All of this is a bonus. All of this is like, ‘Okay, what else you got for me, God?’ Because one thing he doesn’t play about… is me.”

Kapil Sharma and his antics with female actors always leave viewers in splits. The comedian tries his best to flirt with them but fails most ... Read More 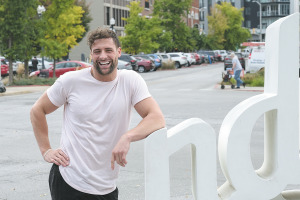 Benedict Polizzi started making comedy videos in high school, but it wasn’t until he got a taste of the real world that he realized he’d ... Read More

Reviews from Broadway and BeyondBy Melissa Rose Bernardo★★★★☆ A 70-minute one-woman show goes beyond the standard stand-up comic styleLast week, prior to the start of ... Read More