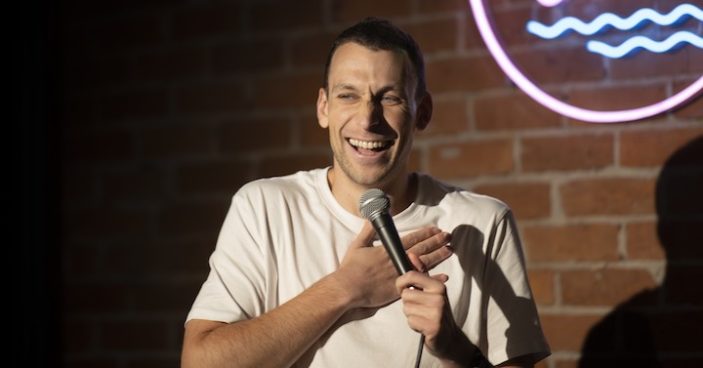 Comedian and cancer survivor, Michael Shafar, is back with a fresh new comedy show. Shafar is a regular on television shows The Project and Studio 10 as well as having a huge following on YouTube. We’ve also captured him at the Adelaide Fringe, where his stand-up comedy shows were well-received.
Shafar’s comedy is not for the faint-hearted. Topics cover cancer, being Jewish (and his mother’s lament at his career choice) and musings on a black Little Mermaid. In fact, it would seem that no subject is off-limits. He has a way of endearing himself to the audience, such that he can get away with it.
This weekend, he’s back in Adelaide for one show only at the iconic comedy club, The Rhino Room. Following that gig, he’ll be back at Melbourne’s Comedy Republic to film a comedy special.
This will be your chance to see the jokes live and in front of your face. Of course, you can also see his special A(LIVE) on Amazon Prime, but there’s something special about seeing a performer live on stage. If jokes about testicular cancer might appeal to you then this is a must.
A Movember ambassador, Shafar has received rave reviews all across the country, but the best review came from his own oncologist who wrote Michael an email that simply said: “Great show, Michael! You were well worth the chemo!”
Catch Micahel Shafar at The Rhino Room in Adelaide on Saturday November 5th, 7pm
He will also be performing at Comedy Republic, 231 Bourke Street, Melbourne, Saturday 19th November, 7pm
Tickets from the respective venues or at www.michaelshafar.com

WATCH LIVEDavid A. Arnold, a comedian who was a producer of the "Fuller House" reboot and the creator and showrunner of Nickelodeon's "That Girl Lay ... Read More

A week of events in Cambridge and Somerville, from Cambridge Science Festival to Honk! fest – Cambridge Day