Select Page
Nov 25, 2022 | 0
RICH LOPEZ | Staff writer
rich@dallasvoice.com
Actor/comedian/singer/advocate and icon Sandra Bernhard is having a moment. This year, she was in Netflix’s Stand Out: An LGBTQ+ Celebration comedy special as well as the latest season of American Horror Story: NYC. She wrapped her role as Nurse Judy Kubrak on Pose last year. She will also be on the cover of the Marfa Journal — a British arts and style magazine ironically not based in or about Marfa, Texas, but inspired by the West Texas artsy town (“It’s a cool publication,” she said).
Now she’s on the road with her new show, Bern It Down, a night of stories, music and laughs.
The 67 year-old artist is unstoppable at the moment. But she does pause for reflection.
At the time of this interview, the Club Q shooting had just happened two days before, and alleged  terrorist/murderer Anderson Lee Aldrich was in custody and facing murder and hate crime charges. Before discussing her show and her life these days, Bernhard wanted to talk about the incident.
Dallas Voice: You’ve always been such an advocate for the community and so outspoken. Hearing about the tragedy in Colorado Springs, do you want to talk about it? Sandra Bernhard: Yes. I do. I wanna say that we gotta stop pretending that there aren’t crazy people walking around. There is an absolute connection to these MAGAs and these people stoking the hatred for the community, women, people of color — the list goes on and on. 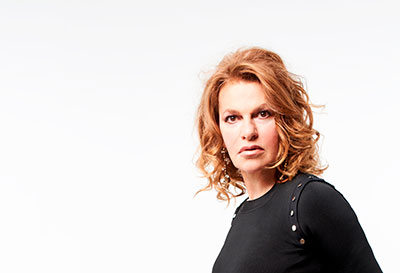 I just don’t understand why we can’t come together and face it and activate and do something about it. The Democrats and Biden are fighting as much as they can to stop this insane rampage of hatred, but what’s gonna happen?
These unhinged people are being fed a bunch of lies, and I can’t understand. I don’t know what has happened to our culture. This is not the right way. We aren’t supposed to be this way.
In the Netflix special, at that time, you chose to speak about the Supreme Court overturning Roe v. Wade and now here you are speaking about this. I’ve been engaged in political and cultural warfare since I was a teen. I graduated high school the year they passed Roe v. Wade. Now we have to go back into those trenches.
I just can’t with how this country operates. The threats to straight white men are apparently too much for them to take, and we have these women who don’t know anything about government in office. I’m not even going to name names, because I don’t want them to get press.
The GOP is just blown up and is this absolute mess and a pit of degradation. If you are a Republican, you are on the side of everything that’s wrong, and that’s all I got to say about that.
Shifting gears, is Bern It Down a whole new show or how do you describe it? It’s relatively new because I haven’t performed much because of COVID. So I talk about what’s going on in my life and the world at the moment. There are pieces about things that happened during the pandemic, but the show is not about the pandemic. It’s very anecdotal.
I love flying into a place, and, in like 15 minutes, I can observe what is going on in the community and bring that to the show. I enjoy coming to Texas even though it’s a crazy time to come. I was devastated Beto didn’t get elected.
I think a lot of people were really trying to get him in there. I know. There are so many good people, and Texas is groovy — a lot to offer. But I think it’s a good time to come. I’m glad I’m coming now to show some support and love.
You are part of the Ryan Murphy squad now with prominent roles in Pose and American Horror Story. You’ve always been around, but these last few years, it seems to be a moment for you. It’s been great. The last few years have just been so positive. Ryan Murphy employs so many great people and talents, and he’s so supportive and cool. It’s great to be part of that ensemble. Pose was revelatory, and in American Horror Story, we’re revisiting some stuff in Pose because they both are set in my era when I was first coming into my own.
As actors, we all wanna be seen in these high profile shows, so I’m thankful for these opportunities. And I’m proud of myself for this work, and I get to sharpen my acting chops.
What’s next for you or on the horizon after the tour? I’m creating a scripted show with Judy Gold, another LGBTQ artist, and we’re getting some traction on it. We’re not rushing, and it’s evolving, but it would star both of us. We’re getting excited and hope someone buys it.
Bernhard will perform with her full band at 7:30 p.m. (doors at 6:30 p.m.) on Dec. 2 at the Granada Theater. For tickets, visit GranadaTheater.com.
Share:
Your email address will not be published. Required fields are marked *

Helium Helium Comedy Club now has a second function: recording studio.Sure, standups have been filming their acts at the inner-eastside venue for years, but this ... Read More

When does comedy cross the line? – WSIU

ERIC DEGGANS, HOST:When does comedy go too far? It's a question comedians themselves are increasingly trying to answer.(SOUNDBITE OF MONTAGE)JIM JEFFERIES: Should comedians ever have ... Read More

Katherine Ryan: MISSUS is heading to Manchester – About Manchester

NEWER POSTJeff Dunham Drops The Dummy Act To Talk About The Popularity Of Ventriloquism And Critics Of His Comedy – Decider
OLDER POSTStream on Demand: Jenny Ortega gets altogether ooky for 'Wednesday' on Netflix – The Spokesman Review