Yvonne Orji, from INSECURE, is back for her second HBO standup special and it didn’t take long; it feels like we just saw her in her first gig. It was actually reviewed here in June 2020. In that special she was out to declare, MOMMA, I MADE IT. Now she is past the pandemic and post-INSECURE and what does she do? She rushes back to the stage well, except for that little dating show on HBO Max) for another go-around at stand-up and that’s okay. 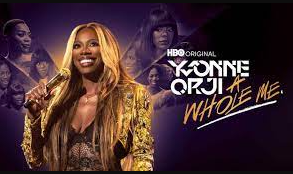 She does so with A WHOLE NEW ME. Oh, she reinvented herself? So, you would logically think that we’d find out just how in this routine and we do. She didn’t just reinvent herself but she reinvented her approach a bit too and that is also okay. In fact, it is important that an artist change it up for their return to the microphone. You can’t be running the same schtick; it needs to be fresh. Orji had a fount of wealth in the material describing her Nigerian roots in the first gig, so the second one had to divert from that theme. She does, though her family, especially her parents, still are prevalent. Also changing it up is the presence of some pretty funny, filmed sketch bits a la A BLACK LADY SKETCH SHOW, a show which she guested on twice in its premiere season.
So, why is Orji a new person? A voice-over sets it up for us. She prefaces with “This is the new me, that was birthed in isolation, built on growth, refined through hurt, curated from introspection, and perfected by healing. The old me met the new me and became a whole me.” Isolation was the pandemic and all the time she had on her hands for introspection. It was there is realized she had no hobbies and off she would go on a riff about that fact and her routine was on its way. She also talks about therapy and dating. As 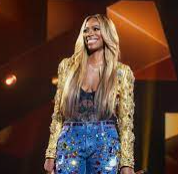 for the sketches she spoofs Shark Tank as she makes a pitch that her parents should give her money for an apartment and she is at the blunt end of a police interrogation about her dating habits. In the best bit, she talks with a therapist about whether she’d could ever date herself and then imagines herself doing just that over the decades. Funny moments, but her in front of a live audience is better.
Obviously, it is in those moments that the audience connects with Orji. She is good at making that connection and keeping it going. They groan, call out and feel everything that she is saying about eliminating those elements that don’t aid you in becoming a whole person. It proves a strong underlying theme nestled in between the jokes.
Find YVONNE ORJI: A WHOLE ME, now on HBO & HBO Max.

Editor at Large of HBOWatch.com and the internet’s foremost HBO expert.
Your email address will not be published. Required fields are marked *

Get local news, offers & more...Comedy Works Entertainment presents RYAN HAMILTON at The Newman Center for the Performing Arts at the University of Denver on ... Read More

By: Author Mirko Parlevliet Posted on Published: August 24, 2022The Netflix September 2022 movies, TV series and originals have been revealed and can be viewed ... Read More