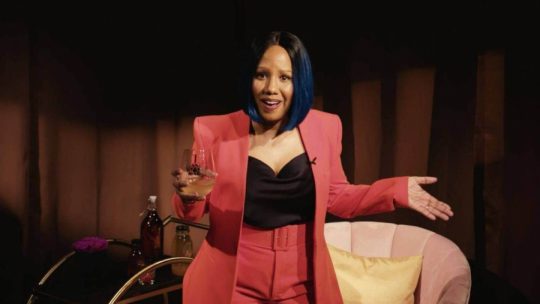 Lake Placid Laughs featuring Hollie Harper
Now, in conversation with Noah Ramer
In the first minute of my interaction with the acclaimed comedian and recent Lake Placid Film Festival collaborator, one attribute became immediately apparent: Hollie Harper loves the spoken word. “I’m a linguistics nerd, I love everything from the etymology of words to new slang.” It’s this passion for words and how they resonate across communities and cultures that has influenced every step of Hollie’s professional journey in comedy.

While Hollie has had an affinity for humor going back to the days of watching the hit ABC sitcom Three’s Company as a child, her first major foray into the comedy world began shortly after graduating from The Theater School at DePaul University: “I started doing sketch comedy because I was watching other groups, which were very sparing at the time in New York City. That’s when it really hit me, ‘wait, you could be doing this. This is not just a far-off dream’”.
It’s after attending several sketch comedy shows that Hollie started to formulate her own troupe, AMERICAN CANDY. What began as a humble exercise in entertaining her community soon evolved at an exponential rate. AMERICAN CANDY grew to a team of nearly twenty talented individuals, performing 52 unique comedy shows over twelve years, to the delight of audiences from across the Eastern Seaboard.
A similarly fantastic experience came from her first collaboration with Adirondack Film during the Lake Placid Film Festival in 2021: “Last year I was on the panel discussing women in comedy. And then I did a 15-minute set for the audience, and they were wonderful.
Photo courtesy of Adirondack Film.
She was so fascinated, in fact, that Hollie is returning to LPFF this year to co-host both a game show and Lake Placid Laughs with frequent collaborator and entertainment multihyphenate, Okema T. Moore: “It’s going to be a lot of fun and I’m just excited and lucky to collaborate with them [Adirondack Film].  [They] love people and film and want to put forth a great film festival.” The talented and passionate individuals at Adirondack Film help to compliment the picturesque location of the Lake Placid, which Hollie found herself overtaken by: “I’ve been living in New York city for 27 years. So, to see that much nature was a little overwhelming, but beautiful and really necessary.”
While Hollie is witty and an excellent comedian, it’s her knowledge and views on life that will leave you changed. Don’t believe me? Come to the Lake Placid Film Festival October 20-23rd.

Photo at top: Hollie Harper, acclaimed comedian and recent Lake Placid Film Festival collaborator. Photo courtesy of Adirondack Film.
The Adirondack Almanack publishes occasional guest essays from Adirondack residents, visitors, and those with an interest in the Adirondack Park. Submissions should be directed to Almanack editor Melissa Hart at editor@adirondackalmanack.com
Your email address will not be published. Required fields are marked * 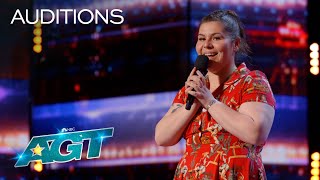 A Pueblo West comedian is back at home on the farm, fresh off performances on the international stage of "America’s Got Talent" where millions of ... Read More