My Media Diet: comedian and rapper Zack Fox – The Face

Words: Davy Reed
Photography: Abdi Ibrahim
16th September 2022
Zack Fox started making noise around 2013 as an illustrator and generally hilarious guy affiliated with Atlanta’s DIY music collective Awful Records. Over the years he’s built a huge social media following thanks to his obscene humour and his sharp commentary, despite the fact that his outspokenness has landed him in Twitter jail more than once.
Although some of his output is totally unhinged, the 31-year-old has enjoyed success in stand up comedy, music and film. In 2017, he made his acting debut in Flying Lotus’s psychedelic body horror Kuso (in a particularly memorable scene, Fox’s character is greeted by a giant bug called Mr Quiggles, who emerges from George Clinton’s anus). After his song Jesus is the One (I Got Depression) – spawned from a ridiculous freestyle with his good friend, the in-demand producer Kenny Beats – topped the Spotify US viral chart, in 2021 Fox released his debut album, shut the fuck up talking to me. The day after I meet Fox at The Standard hotel in London, he stirs up a moshpit with every joke rap song he performs at the Islington Academy.
Scroll down to get some insight into what’s stimulating Zack Fox, from what he’s been reading, listening to and playing on his Nintendo DS.

The music scene I’ve been dipping into is…
This real Southern, lo-fi, minimal blues-slash-soul. I was in Dallas, Texas and I went to this blues bar. It was grown and sexy – like only Black folks who are 50 and up. And there was a dude in there with a shirt that said ​‘Edward bluesman Thomas’ on it and beneath that it said ​‘Coochie Lickin Man’. And I was like, ​‘Yo, where’d you get that!?’ He was like, ​‘It’s my merch.’ So I copped a shirt off of him and he goes up on the stage and he performs Coochie Lickin Man.
The guiding principles of this genre are really punk. It’s cheaply-produced and it’s really funny. Some of it is the most mind-blowingly raunchy shit that you’ve ever heard in your life. There’s also Sir Charles Jones, he’s probably the Jay‑Z of the scene, or the Future – the most prolific. Jeter Jones is another one. He’s ex-military. And now he just makes songs about, like, eating pussy in a truck bed. [The artists] all tour a Chitlin’ Circuit in the south. It’s deep Southern shit – Georgia, Mississippi, Louisiana, Texas. And it’s all older Black folks. Sir Charles Jones is doing millions of YouTube views. But New York or LA people have never heard of him. But if you went to a cookout outside of Macon, Georgia, you would hear this music.

The last movie which blew my mind was…
Titante, by Julia Ducournau. I saw her horror movie Raw when that and Kuso were both at Sundance [in 2017] and it was funny because we were both making people leave the screenings. And I just kept following Ducournau. Titane is so cool. It’s like body horror, it’s got Cronenberg influences. It’s psychologically troubling. But at its core, to me it’s a really sweet film. And it’s a really queer movie. It’s kind of about motherhood, belonging and transness and there’s a lot of shit balled up into it. I’m trying so hard to describe the movie without [spoiling] the plot. You’ve just gotta go see it.

The best Twitch streamer is…
My homie Knxwledge. Hands down. He’s the blueprint. Because he’s not really trying to tell you how to feel about anything, he’s just playing his beats –which he has millions of, apparently. And it’s kind of surreal, like BET Uncut for the internet. He pulls out so many nostalgic clips from 106 and Park, like K‑Ci & JoJo performing on daytime talk shows and just funny moments in Black culture that he lays over his music. It’s kind of soothing, which was a heavy thing during [the lockdowns]. Knxwledge’s music felt like a mother’s hug.
A graphic novel I’d recommend…
Asterios Polyp. Probably the best graphic novel ever. It’s about an architect who has never built anything, but he’s a professor of architecture in a college. The themes of it are how we all see reality differently, how everyone has a different lens through which they experience consciousness. And it’s about dichotomy, people who live in a very binary way – good, bad, evil. It’s the only graphic novel that could never be any other format of entertainment. David Mazzucchelli used to do Batman comics and stuff, but he made, like, the fucking Frank Ocean’s Blonde of graphic novels.
The games I’m into right now…
I got into ROM hacks. There’s a big community online of people taking old Pokémon games, the software and creating an entirely new game. [Points to Nintendo DS on the table] This is Pokémon FireRed:Rocket Edition, where you play as a Team Rocket member. If you battle another trainer, you can steal one of their Pokémon, but you have a bounty that grows with every crime that you do. There’s cussing in it, people get beat up and killed in it.
There’s so many of these [ROM hacks]. I feel like some of them are better games than Nintendo could have ever made. But some of them are just really stupid. There’s one called Pokémon My Ass. When you battle people, you’re butt naked. And they figured out where in the game they could fit in sexual shit. Like, in [the original] Pokémon game, there will be a tree that you have to cut down. But they switched it to an old man. So you go up, and you talk to the old man, and he’s getting his dick sucked in the woods. So you gotta come back later.
A rundown of things to read, watch and listen to each week. 0% Spam. 100% The Face.

Medcalf: It's OK to laugh, even in these tough times, Black comedians in Minnesota say – Star Tribune

Five minutes into a recent conversation with Joy Dolo, an actor and comedian with the Blackout Improv troupe in Minnesota, I could see she had ... Read More 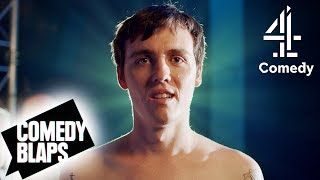 The baby-faced oddball has gone from performing to tiny audiences to winning live comedy’s most coveted prize, the Edinburgh festival fringe comedy awardWhat does an ... Read More