It’s time for another round of some Horrah goodness. 2022’s season brings some high expectations as it almost feels like an event 3 years in the making. We’ve had events that celebrate the past, celebrate 80s nostalgia, celebrate the Walking Dead, but we’ve never had a year celebrate the most obvious of all themes – Halloween.
Universal leaned in hard with that angle to much success. After all, this year is the 31st event; and you’ll find the number 31 referenced throughout the park. Besides that, the park is filled with vintage iconography and visuals – including pumpkins, witches, black cats, with colors of oranges, greens, and purples, which also led to a very strong year of merchandise. 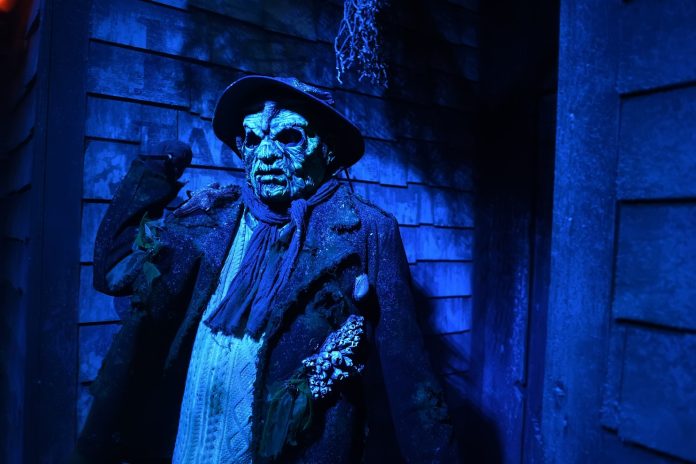 The event has also grown to the point where it is no longer contained within the boundaries of Universal Studios. From Cabana Bay’s Universal Monsters: Gallery of Legends to the awesome new Dead Coconut Club tiki lounge, you’ll need a weekend (and maybe more) to really enjoy all that Halloween Horror Nights has to offer this year.
So, what were our first impressions of this year’s event? The first weekend tends to have that “new car smell” when it comes to rankings, and hyperbole finds its way into the discussion. Another thing to keep in mind is that unless outright stated, none of these issues fall on the actors and are not a reflection of their performances. They are the heartbeat of the event and give their all night in and night out.
It’s very possible, and very much likely, this could change; but after opening weekend, here’s where we stand: (Some Spoilers. Video links to each house and zone are included in the title.) 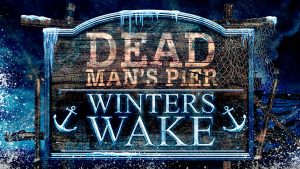 A perfect score! This house is hauntingly beautiful and gorgeously eerie. One of the most impressive sets in Horror Nights history with some killer lighting effects that give the scareactors a ghostly glow. Our jaws dropped when we saw the Siren playing her violin on the emerging sunken ship. Dead Man’s Pier had a lot of hype going in and it certainly lives up to it. There aren’t a lot of houses that get the “All-Timer” tag on Opening Weekend. Do not miss this house! 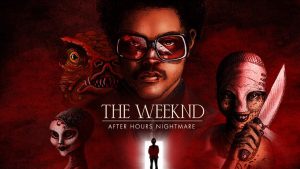 The Weeknd: After Hours Nightmare (∗∗∗∗¼)

Admittedly, I was skeptical on the house. Even though I’m a fan of the Weeknd’s music, I was wondering how his visuals would translate into a haunt. Well, fear not, as this house is visually striking with some unique horror imagery, while capturing the essence of The Weeknd’s After Hours album. The house is just a straight vibe. 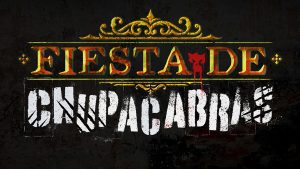 The house is interesting as the main scares come from the villagers (with some pretty awesome mask design), but the looming presence of the Chupacabra adds an extra layer of suspense, where it does genuinely feel like its following you. The set design is top notch as well, feeling like an actual, lived-in, small Latin American town. If the actors get their timing right, it can definitely rank higher by event’s end. 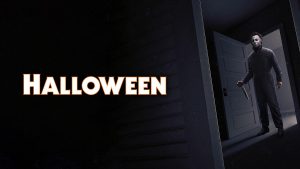 No, 2022’s Halloween does not top 2014’s iconic house; but that was very tough act to follow. 2022’s version is still a very good house, and does a great job changing it up with some new scares while still hitting some of those familiar Myers beats. The biggest difference is this year’s version feels like a homage to the 1978 film whereas 2014 felt like a tribute to the franchise and Michael, himself. 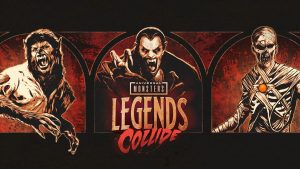 The 3rd year in a row we get the Monsters featured at the event. It’s a solid house but has some flaws. Most notable, the house feels more like Mummy vs Wolfman than an actual triple threat, where Dracula “3rd Parties” the battle near the end. Despite that, the set design is surreal, where it genuinely feels like we’re traversing through an Egyptian dig site. The actors do bring the heat, however, and I’m willing to bet once they find their groove – the house will be able to overcome those flaws and be even better. 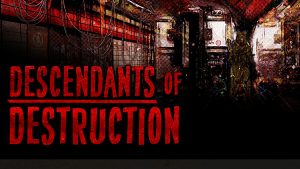 There’s no doubt that Dead Man’s Pier’s set design will be talked about by everyone, but Descendants definitely deserves some recognition, too – especially as it’s located in a tent. It truly feels like an abandoned underground society, with some impressive sets. The actors were intense during our run, but the plot of apocalyptic cannibals feels a little too familiar, where it doesn’t feel like a fresh take. It’s possible if the actors can continue the passion and intensity, it can overcome that repetitiveness. 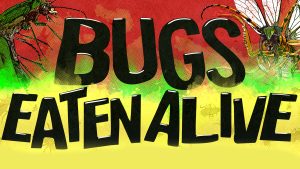 I think this might be the most polarizing house of the event. It’s not a bad house by any means and has some pretty fun scenes and storytelling, but I think the house may not hit the same way to guests if they’re not afraid of bugs. I know that seems like an “obvious” statement, but unless you’re suffering from Entomophobia, Trypophobia, Arachnophobia, Katsaridaphobia, etc… etc… There’s a good chance you shrug the scares off. The Black Comedy of the house won’t help non-bug fearers, either. 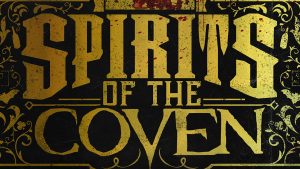 Spirits of the Coven (∗∗∗)

So, it was hard to properly rank this house. It definitely has style and a really clever concept. I love the idea of a witch speakeasy, and there’s an awesome story to be told – but it doesn’t seem to translate as clearly as maybe intended. The cast does its best, but I think a bit more aggression could help, especially as we enter into the middle of the house and into the finale. 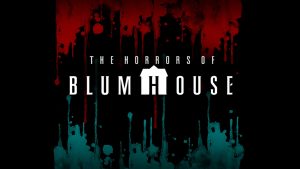 The Horrors of Blumhouse (∗∗½)

Although Freaky and Black Phone are enjoyable films, we weren’t big fans of Blumhouse after opening weekend. We missed a lot of the Freaky action, so that was a big factor. The Black Phone is definitely the best part – but The Grabber is EVERYWHERE, which gets a little repetitive (obviously a byproduct of the film having limited characters and locations). This is also the first time the Fast and Furious queue has been used as a house location, that allowed for an interesting design choice; where there’s a noticeable “break” as we enter into the Black Phone section of the house, which is a little odd. 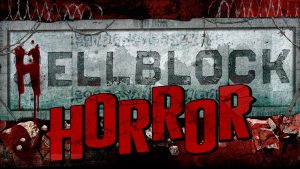 Hellblock Horror (∗∗½)
It’s fun to return to Hellgate Prison and it is a clever concept, but we wish there were some more recognizable monsters. The set design is fine, and the actors do their best, but we were expecting something a little different than what we got. Not much to say other than it’s fine.
♦♦♦♦♦♦♦♦♦ 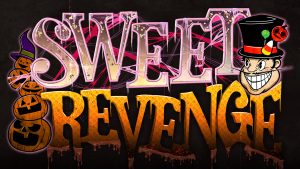 Sweet Revenge (∗∗∗∗½)
The New York curse has been broken! After years of having the biggest scare zone location feel empty, Sweet Revenge fills out New York with parade floats, lights, and a whole bunch of killer children. The vintage costumes are great, and the actors definitely seem like they are having a damn fun time in their roles. Special shoutout to the people who play Major Sweets, Miss Treats, and the seniors escaping the murderous youth. 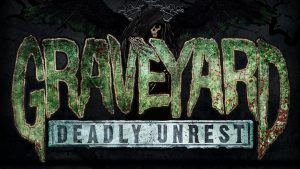 Graveyard: Deadly Unrest (∗∗∗∗½)
Graveyard almost feels like a throwback to early years of Horror Nights. The street is filled with tombs and crypts – but the ambience is surreal. Fog fills the air in nearly complete darkness, with an occasional strobe flash that is used to great effect. Universal also capitalizes on the darkness by using black lights to illuminate costumes with an eerie spectral glow. Whereas Sweet Revenge is a fun, murderous romp; Graveyard is a beautifully solemn otherworldly experience. 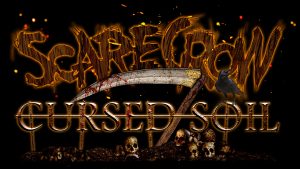 Scarecrow: Cursed Soil (∗∗∗∗)
Another zone boosted by its ambience and cast. The actors use the tight quarters and darkness of Central Park to great effect, where I’ve seen some of the best scares so far this year. The barn allows for a neat experience, as it lets the Scarecrows to get you from above and give a few hiding spaces below. Honestly, all the zones this year are fantastic. The only reason this is lower on the list is just because the traffic in the zone can impede the enjoyment a little bit. We gotta feel bad for a few of the actors, though – as I’m sure they’ll be inundated with a whole bunch of “it’s corn!” joke attempts. 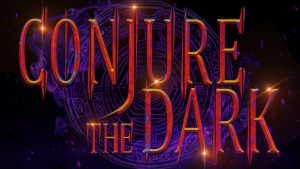 Conjure the Dark (∗∗∗∗)
Another very strong scare zone that can get congested with crowds. The character design here is the strongest aspect, with some great masks and makeup. The mini-shows are also very enjoyable, each unique in their own way. It bears repeating, the actors really seem to be enjoying themselves in their roles, which translates into some great scares and interactions. 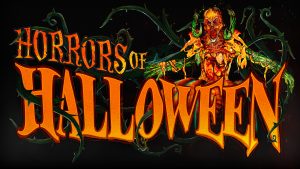 Horrors of Halloween (∗∗∗½)
All hail the Pumpkin Lord! Last year’s 30 Years zone crawled so Horrors of Halloween could walk. As we’ve said in previous years, Production Central gets too backed up with traffic, that they need to create a vibe as we enter the park. The Pumpkin Lord welcomes us to the event as we walk under the huge structure filled with vines and pumpkins, with nods to the other zones we’re about the experience. Vibe accomplished.
♦♦♦♦♦♦♦♦♦ 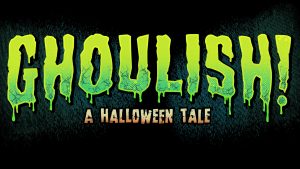 Ghoulish! A Halloween Tale (∗∗∗∗)
Marathon of Mayhem is no more, and that’s OK. Ghoulish tries for something completely different and we think succeeds very well, taking popular songs and creating a unique and original spooky, fun spin on it. The highlight of the show is definitely The Weeknd’s “Blinding Lights” section. 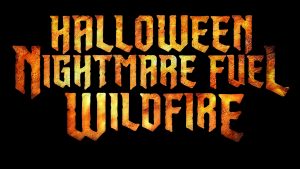 Halloween Nightmare Fuel: Wildfire (∗∗∗)
If you loved last year’s sexy dancing, hard rock music, and some amazing tricks & performances – you’re in luck, as this is basically the same show with a few new bells & whistles. Last year we gave it 4 stars, but since this is essentially a repeat, we’ll drop it a star. It’s still a must-see show, especially if you missed out on last year.
♦♦♦♦♦♦♦♦♦
As stated previously, there’s a lot to experience at this year’s event, we haven’t even brought up all the awesome food & drink there is to enjoy. We’ll have more in-depth specific coverage of all the Horror Nights options that can be experienced this year. 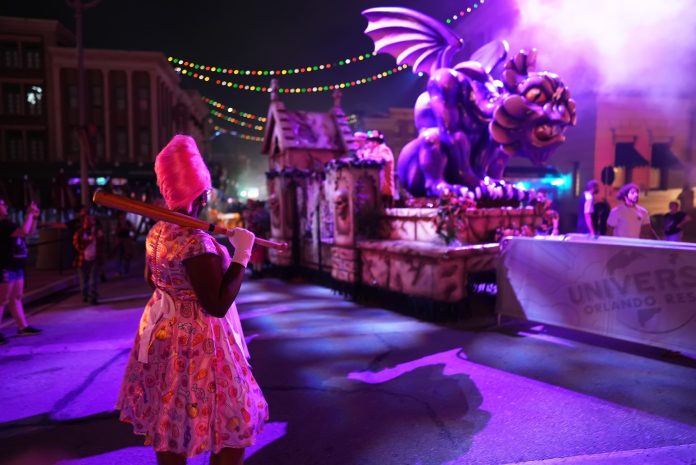 Yes, while we spend time ranking houses and discuss the minutiae of which scare is best, or what sets look incredible – it ultimately doesn’t matter unless you’re having fun and that’s why we keep coming back every year. This year, more than ever, the event feels like an awesome Halloween party. Universal seemed to really relish in the opportunity to celebrate the traditions of the holiday, because as a collective, the event is one of the strongest in recent years.
Universal Orlando’s Halloween Horror Nights runs select nights through Monday, October 31 – unleashing 10 haunted houses, five scare zones, and two outrageous live shows.
Until then, we’ll see you all in the fog!

The first High 5 Sports Team of the Week for the season is the Raiders of Alpharetta High School. Good Day's Paul Milliken visited the ... Read More

Sep. 12—Comedian and actor Kevin Hart has announced the addition of eight shows to the second leg of his Reality Check Tour, including a stop ... Read More