Actor, comedian and podcaster Kevin Hart – like every great rapper – has his own posse. Only in Hart’s world, that means a phalanx of some of the best comic minds, writers, roasters and toasters in the business. Anthony Moore, but one of Kevin’s foils in Hart of the City, is a fascinating familial comedian – not so much because his material is family-friendly, but rather because it feels hilarious homespun. On the same Comedy Cellar bill – you know, the place where Chris Redd sadly got brass knuckle beat down the other night – is Redd’s one-time SNL and Oscars ceremony writer Nimesh Patel who has also been named one of the Comedy Central Network’s “COMICS TO WATCH.” Not bad. 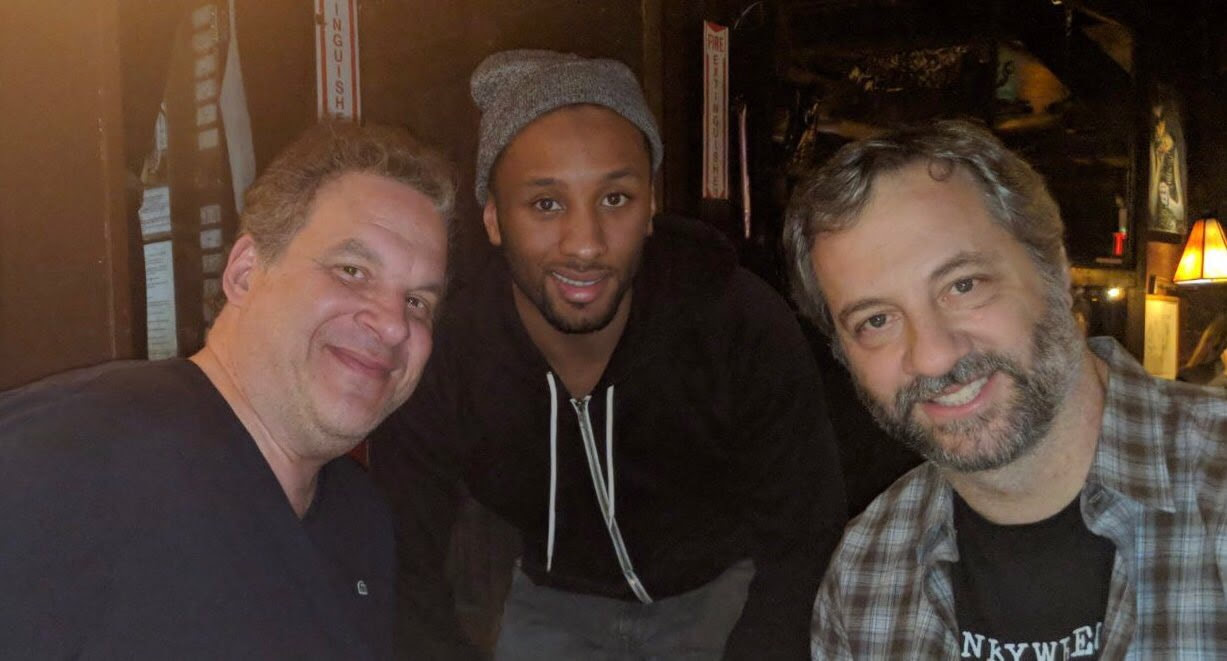 Remember that long before writing and directing The 40 Year Old Virgin and Knocked Up or producing hit comedy series such as Girls and Crashing (see below), Judd Apatow was a stand-up comedian and Adam Sandler’s one-time roommate. With that legend behind him, sure, Apatow will do some stand-up, probably about being close to his family and being woke (which he famous is, especially considering that Maude Apatow is a big part of the teen drama Euphoria). But this LA comedy club night, in benefit for the National MS Society features special guest such as the always absurd, recent SNL-ex, Melissa Villaseñor and wiry, wily podcaster Marc Maron among other very special guests. WTF?!

One-time Northern Arizona University Division 1 quarterback turned stand-up comedian Daniel Bridge-Gadd – there’s a phrase you don’t hear often – has as much of a knack for stand-up comedy with an eye toward family themes and sharp observational humor as it does passing down the field.

Sorry to head back to Los Angeles and Largo at The Coronet Theater, but this is Pete Holmes we’re talking about: the holy rolling, laid back, post slacker comedian and one-time star and co-writer of HBO’s comedy club series, Crashing…. with Judd Apatow. And his low voiced, slow talking stand up affair – this time in benefit for Homeboy Industries – has its own murderers row of special guest, big name performers such as Everybody Loves Ray Romano, one-time SNL Bush impersonator and Church Lady Dana Carvey with live accompanied background music from Matt Berninger of The National. Double WTF?! 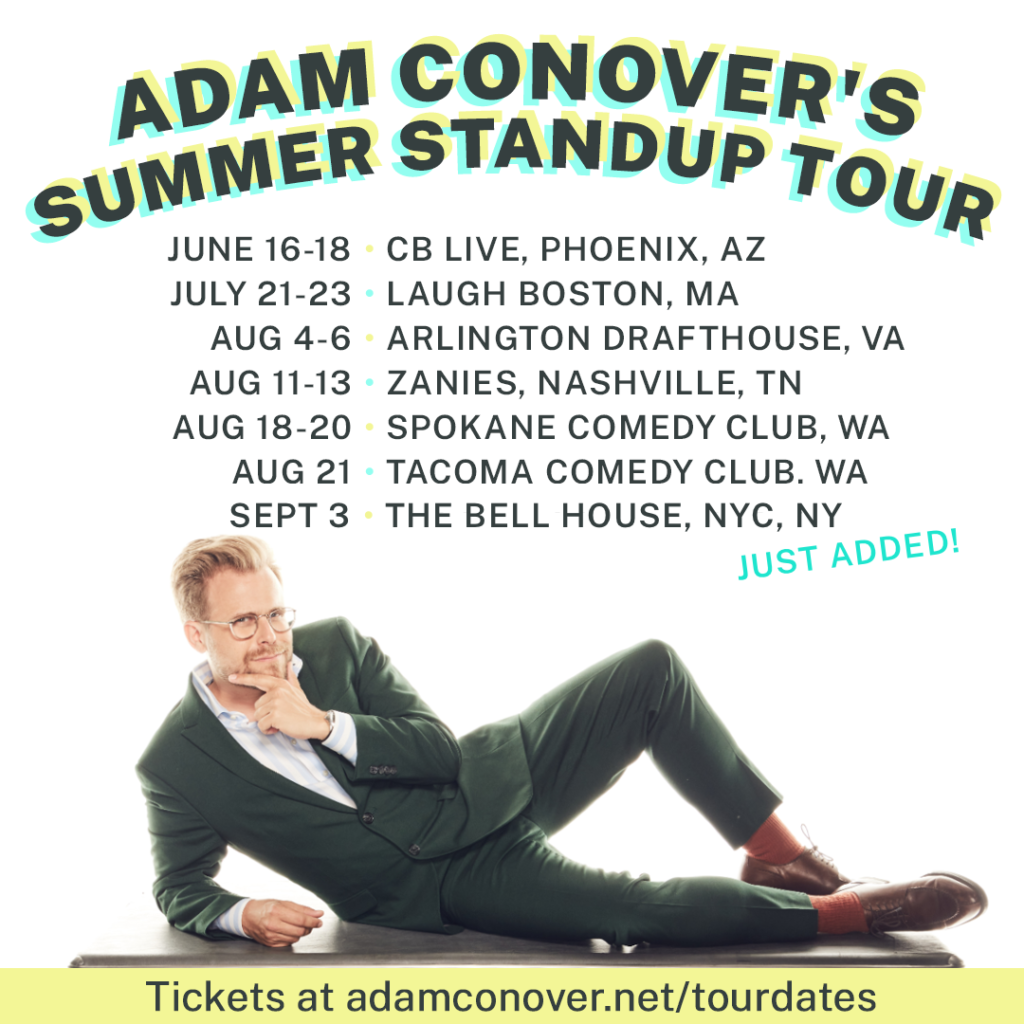 The sartorially correct and tonsorial-ly towering (he’s got really good, really high hair) host of HBO Max’s Adam Ruins Everything and Netflix’s The G Word with Adam Conover – to say something of the US version of The Crystal Maze on Nickelodeon – is something of a smart ass when it comes to stand-up comedy. Blame his time in at Baird College with that BA in Philosophy (who majors in Philosophy, anymore) for that smart comic edge and that overall smug, sarcastic manner.

How can you feel bad when you have a one-time Navy man, an aircraft-carrier aviator with some 200+ flights (and landings) to his name who also happens to work clean? This is like watching Top Gun: Maverick without all the dizzy special effects and Tom Cruise’s grinning.

The Sandman doesn’t tour often what with going the film star route in stark serious fare (Uncut Gems), goofball slap stick flicks (Hubie Halloween) and dramedy in-between those two poles (Hustle). Yet, not unlike what he did on the recent Netflix special, 100% Fresh, Sandler – with a pianist and an arsenal of electric guitars – takes to the stage of casinos, arenas and large-scale comedy clubs and does a mix of short, absurd jokes that end abruptly, hypnotic long form stories that last forever and silly songs – mostly about hating his kids, trying to have digital and oral sex with his wife, and staving off the aging process while wearing sweatshirts. Schneider though is the evening’s wild card – an independent party politico and equal sides offender who can break out the Elvis Presley songs in a genuinely strong, clarion clear voice. A very entertaining show, I promise, and a handsome reunion of old friends and one-time Saturday Night Live alumni.

A.D. Amorosi is a Philadelphia-based journalist who, along with Philadelphia Weekly, writes for numerous local, national and international publications including Variety and the Philadelphia Inquirer.
Up Next in Reviews
Randy Rainbow introduces Pink Glasses show
Review of The Best Comedy Club Shows
Check out Those With Two Clocks through its final run this weekend at the Wilma Theater.
Reboots and prequels and Hollywood’s overall need for revivalism aside, can and should Rocky survive yet another round?
Follow @PhillyWeekly

Deaw 13: Thai Stand Up Comedy is a stand-up comedy special starring Udom Taephanich, a very nice Thai guy, a star in his country who ... Read More