« Rocktober: October 9 | Main | Barns Courtney at recordBar, Kansas City MO (2022-09-17) review »
Read more Kansas City Music Guide.
September has been more like “Rocktember” with a busy month of shows so far, but Rocktober next month looks busy as well, so use those concert dollars wisely.
The pandemic lockdown still has ripple effects, from re-scheduled and postponed shows to artists taking time off for their mental health well-being. Rising star KennyHoopla was one of those, supposed to play The Truman this week but writing, "I need to take this time to focus on myself and my mental health. I will be back soon – a stronger human and artists for myself and all of you. Once again, I apologize.”  We wish him the best.
Here’s what’s happening in the Kansas City/Lawrence, KS metro September 19th-25th.
(Several artists are still requiring precautions for entry, so check with the venue and/or assume vaccination proof, might still be required)
Monday Sept 19
Warren Wolf, Sept. 19-20, Lied Center. $19-$35
Warren Wolf is a multi-instrumentalist /vibraphonist from Baltimore, MD. After graduating from Baltimore School for the Arts, he went to study at the Berklee College of Music.
He’s performed or recorded with some of the world’s best musicians, including the Jazz at Lincoln Center Orchestra with Wynton Marsalis, Ron Carter and many others and most recent release is with Christian McBride, 2021’s Live at the Village Vanguard. 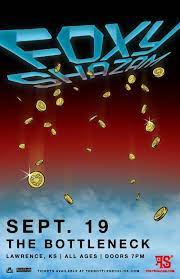 Foxy Shazam, Bottleneck-Lawrence, $25-$30
Cincy alt-glam rockers released new full-length The Heart Behead You in Feb and also a remaster of their debut album this summer and are out on their Hidden Treasure Tour.
Tuesday Sept 20
Pavement, Uptown. $49.50-$125
Pavement first teased this reunion back in June 2019, announcing they would reunite starting with Barcelona’s Primavera Sound festival in 2020. Those shows were eventually postponed because of the pandemic, but the reunion tour is now in full swing. Pavement broke up in 1999 and reunited for the first time in 2010. ‘We are just going to play these songs together, we like each other, and so this will be familiar”, leader Stephen Malkmus has said.
Electro-pop/sound collage openers Annalibera are led by Anna Gebhardt who emerged from a classical music background in 2015 and latest album Moon Bath, was made in collaboration with producer Philip Rabalais. 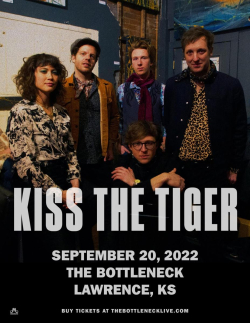 Kiss the Tiger, Bottleneck- Lawrence, FREE
We’re fans of the Minneapolis indie alt-rock band whose third studio release, Vicious Kid, is out now. The band began in late 2016 and has been gradually gaining more attention ever since, named a “Picked to Click” band by former alt-weekly City Pages in 2019. We just caught them here in February, so are glad to see they are returning and with a free show. KC funksters Supermoto to open.
Melvins, recordBar, $25

Washington state sludgy alt-rock pioneers are back with new six-track album, Bad Moon Rising, described as “big riffs and scary vocals” with an exclusive orange vinyl only available at their shows. They also recently covered Soundgarden’s “Spoonman” with that band's drummer Matt Cameron, on vocals. We Are the Asteroid to open.
Wednesday Sept 21

Built to Spill, Granada- Lawrence. $29.50
The Boise ID indie rock band has now been around an amazing thirty years, and has a new album, When the Wind Forgets Your Name, out now on SubPop, their first of new material since 2015. 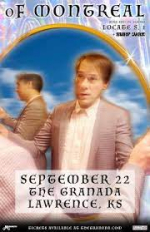 The Athens GA alt indie-pop band has been busy during the lockdown, releasing I Feel Safe with You, Trash last year, and now their eighteenth studio album, Freewave Lucifer F<ck F^ck F>ck was released in late June. We caught them live several times last decade, the most recent being five years ago, and any band ending their set with a song titled, “Heimdalsgate Like a Promethean Curse “is going to be an interesting one. Locate S, 1 and Surf Wax to open. 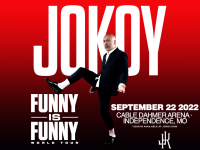 Jo Koy (comedian), Cable Dahmer Arena,$47.50-$72.50
One of today’s premiere stand-up comics has come a long way from his beginnings performing at a Las Vegas coffee house. The Filipino-American continues to gain fans with his astute observations of his mother, son, growing up, and everyday life. Koy released an autobiography (Mixed Plate: Chronicles of an All-American Combo) last year, and comedy film, Easter Sunday via Steven Spielberg and Amblin Pictures/Universal earlier this year.
His fourth successful Netflix special, Live at the LA Forum, just started streaming and this Independence, MO show, is a relatively small venue, so catch him here, a little more close-up, than elsewhere. The comedian is on his Funny is Funny World Tour.

Nabil Ayers, Lawrence Public Library, reading/signing – Free
The drummer, entrepreneur, record executive, and essayist discusses his memoir, My Life in the Sunshine: Searching for my Father and Discovering My Family. His mother and former ballerina would have a son with acclaimed jazz musician Roy Ayers, fully expecting and agreeing to his absenteeism. Ayers recounts a life spent living with the aftermath of that decision, and his journey to build an identity of his own, despite his father’s absence.
Co-sponsored by KU's School of Music and Departments of American Studies and African and African American Studies. The Raven Book Store will have copies of the book for sale.
Friday Sept 23 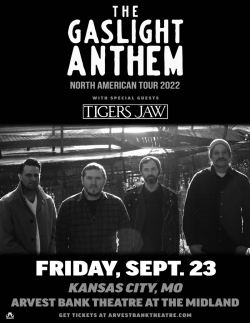 The Gaslight Anthem with Tigers Jaw, The Midland. $39.50
The New Jersey folk punk band announced their return to the road with their first headline tour in four years. “I am very pleased to announce to you all that The Gaslight Anthem is returning to full time status as a band,” said front man Brian Fallon. “We’re also beginning to write new songs for what will be our sixth LP. We’re looking forward to the future and seeing you all again. We want to thank you for staying with us.”
Live, they recently been covering some Seattle sounds with Mother Love Bone and Pearl Jam covers, as well as could sneak in a Nick Cave song. Most recently, we caught leader Brian Fallon and his band live at a 2018 Minneapolis show.
Scranton PA alt-rockers Tigers Jaw open, in support of last year’s I Won’t Care How You Remember Me.
Josh Turner, Ameristar, $58-$195
With his deep voice and distinctive style, Turner is one of country music’s most recognizable hit-makers with songs like “Hometown Girl,” “Would You Go With Me,” “Why Don’t We Just Dance” and “Long Black Train”. (He also plays in Manhattan KS the night before this show)

Jake Shimabukuro, Lied Center. $14-$30
The acclaimed Hawaii-born ukulele player can play any genre of music on his small instrument – jazz, rock, blues, bluegrass, folk or even classical and added to his twenty-year career with last year’s Jake & Friends album release, collaborating with Willie Nelson, Bette Midler, Jimmy Buffett, Kenny Loggins, and others. In 2021, he was also nominated by President Biden to serve as a member of the National Council on the Arts.
Protoje, Bottleneck- Lawrence, $35-$40
Jamaican dub reggae performer is out on his Lost in Time Tour, and has new single, “Family” with opener Jesse Royal. Lila Iké is also to open, both mentored on his own In.Digg.Nation label.
My Name is Not Mom, (comedy) Uptown. $39.50-$79.50
Billed as a hilarious journey through motherhood with internet sensations Tiffany Jenkins, Meredith Masony and Dena Blizzard. After helping fans get through the pandemic, this comic trio shares their take on mothering through the sleepless nights of the toddler years, middle school craziness and trying not to physically attack a high schooler. This live event features stand-up, stories and videos from their online community and audience interaction. Meet and greet packages available.
KennyHoopla with Nothing,nowhere The Truman CANCELED
Saturday Sept 24

The heralded alt-rock band is now in the thirteenth year of their re-convening and a fifth album since, Sweep It Into Space, on which Kurt Vile guests and which was originally scheduled for issue in mid 2020. J Masics, Louie Barlow, and Murph still carry on, now almost forty years after thy first started playing together.
Ryley Walker to open, who we caught live at a 2018 headlining show.
Ozomatli, KC Live! Free
A guaranteed party atmosphere for Los Angeles Latin, hip hop, rock, salsa, jazz and funk band who began playing together back in 1995. The name Ozomatli is derived after the Nahuatl word for the Aztec astrological symbol of the monkey, the god of dance, fire and music with latest album being 2020’s Moving On.
The Grammy winners have even served as Cultural Ambassadors to the U.S. and embarked on a number of government-sponsored tours, created a song for the LA Dodgers, and performed with numerous orchestras across the States. And, it’s a free show!
Freedy Johnston, Bottleneck-Lawrence, $20
Longtime Kansas Americana singer-songwriter has a new album, Back on the Road to You, released earlier this year. Lawrence band Get Smart! who reunited in 2020, will open.

GWAR, Grinders KC, $30-$59
Prepare to get messy in the best possible way, as your Lords and maggot Masters host the fabled GWAR-B-Q on their Black Death Rager Tour with special guests Light the Torch, Nekrogoblikon & Crobot. Food, booze, tunes, and no doubt a lot of showered blood, make this a memorable summer tradition.
Chicago Comedy All-Stars, TPAC, $25-$35
Billed as a group of the best stand-up talent the Windy City has to offer, and whose on-stage credits include The Tonight Show, Comedy Central, CMT, The Oprah Winfrey Show, Last Comic Standing, and more, and regularly tours worldwide.
Sunday Sept 25 Bear's Den, Knuckleheads, $23.50-$28.50
The British folk alt-rock duo returns to these shores in support of fourth full-length, Blue Hours, released in May (via Communion Records which they co-founded) and debuting at #6 in the UK. We saw them headline a few times in the last decade, when they broke from opening Mumford and Sons shows, to head out on their own.
Opening singer Izzy Heltai has his Day Plan EP out now.
Clinton Kane, Madrid Theatre, $26-$51
Australian pop singer-songwriter (LA-based, of Filipino/Norwegian heritage) finally released his debut full-length, Maybe Someday It’ll All Be OK with newest single, “14”. He is also a Vevo DSCVR Artist to Watch for 2022.

You can follow this conversation by subscribing to the comment feed for this post.
Posted by:  |
This is only a preview. Your comment has not yet been posted.
The letters and numbers you entered did not match the image. Please try again.
As a final step before posting your comment, enter the letters and numbers you see in the image below. This prevents automated programs from posting comments.
Having trouble reading this image? View an alternate.

(URLs automatically linked.)
Your Information
(Name and email address are required. Email address will not be displayed with the comment.)

One of the innovative dance reality shows with a broad audience of viewers of all ages is DID Super Moms. The third season of the ... Read More

Filed under:Saving the best for last2022 is already starting to wrap up. Pretty wild, right?It’s been a good year at the movies, with plenty of ... Read More